Airlines face another huge hit after a slight recovery in passenger numbers on their domestic routes, amid curtailed international flights.

According to the Korea Civil Aviation Association, some 195,410 passengers took flights last weekend, down 18.7 percent from the previous weekend. Among them, 180,235 were domestic passengers.

In a desperate bid to stay afloat, Korea’s two flagship carriers, Korean Air and Asiana Airlines, have been converting empty passenger seats to haul cargo. But they still suffered a more than 40-percent decline in revenues during the second quarter of this year.

The situation is even more severe for low-cost carriers, which saw revenues decline by more than 80 percent over the same period.

They had been hoping to make up their losses during the third quarter when they forecast the epidemic would be eased. However, a budget-carrier employee said, “We expected a recovery as we saw the number of domestic passengers almost reach pre-coronavirus levels recently, but we faced a difficulty again after a brief respite.” 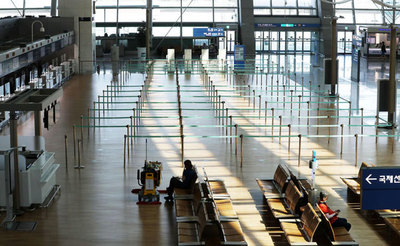 All Int'l Flights to Jeju Come to a Halt

Airlines Suspend Most Flights to Europe, U.S. as Coronavirus Spreads

Nearly All Flights to Japan Suspended

Travel Industry Swept by Wave of Cancellations to Southeast Asia

The number of people seeking unemployment benefits fell last week for a fourth straight time to a pandemic low, the latest sign that America's job market is rebounding from the pandemic recession as employers boost hiring to meet a surge in consumer demand.The Labor Department reported Thursday that...

The government's contract with Moderna was so sloppy that it failed to specify delivery dates for coronavirus vaccines, it was revealed Tuesday, contradicting its claims that the drug maker did not deliver on time.The government has been suspiciously cagey about the terms and cited alleged confident...

Abe Returns to Hospital, Fueling Speculation About His Health

Japan's Prime Minister Shinzo Abe visited the hospital for the second time in a week, fueling speculation he may be facing a serious health issue.Following his visit to Tokyo's Keio University Hospital, Abe, 65, told reporters he was following up on a previous visit and to undergo additional tests.&...