NCsoft CEO Kim Taek-jin was the highest-paid executive in Korea in the first half of this year, according to business reports published by major listed companies on Tuesday.

NCsoft said Kim received the princely rewards because the company successfully launched its Lineage 2M mobile game and posted its best-ever performance in sales and operating profit in 2020 despite the uncertainties of the coronavirus pandemic.

Including severance pay, the top earner was Hyundai honorary chairman Chung Mong-koo, who stepped down in favor of his son last year and earned W30.23 billion including a W29.76 billion golden handshake from holding company Hyundai Mobis.

Next was late Nongshim chairman Shin Choon-ho with W21.42 billion.

Samsung chief Lee Jae-yong has worked without salary since February 2017 because he has been in and out of jail.

Korea Has Only 4 Self-Made Billionaires 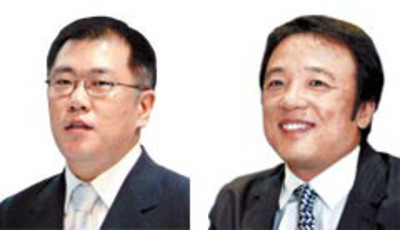 President of NCsoft Poised for Next Big Leap

To remove superglue from the skin

To remove superglue from the skin, rub it with olive oil.

Genesis on Thursday unveiled images of the GV60, its first fully electric car. Designed to minimize air resistance, the small SUV boasts a sporty look with the brand's signature double-lined quad lamps, but the grille is placed low on the bumper to help cool the batteries. The carmaker plans to laun...

Protesters gathered late Sunday in the U.S. city of Kenosha, Wisconsin after police there shot a Black man. A video posted on social media shows the man walking in front of a vehicle while three officers follow him with their guns drawn. As the man opens the door of the vehicle and leans inside, one...

Major conglomerates have posted record sales this year but created almost no new jobs. According to the semiannual business reports by the 30 largest businesses in the country, they posted W381.97 trillion in sales in the first half of this year, up 19 percent on-year, and W33.18 trillion in operati...

Disaster movie "Sinkhole" attracted over 1 million moviegoers in less than a week since its release on Aug. 11.That is the shortest time for a Korean film to reach the milestone so far this year amid lean pickings for movie theaters in the coronavirus pandemic. According to the Korean Film Council, ...

The World Health Organization said Wednesday the best way to slow the spread of COVID-19 variants such as the delta strain is to get more initial shots to unvaccinated populations, not booster shots to the fully vaccinated.  At the agency's regular briefing in Geneva, WHO Director-General Tedro...
Apartment Price Bubble Keeps Inflating
Hezbollah ‘Digging Tunnel with N.Korean Technology’