Some 2,052 people newly tested positive for coronavirus as of Friday morning, the second day in a row infections rose above 2,000 again.

The government on Friday extended lockdown for another two weeks until Sept. 5 since the current rules seem to have had little effect in reducing numbers over the weeks they have been in place while vaccination proceeds at a snail’s pace.

But hopes are dimming that Koreans will be able to enjoy a normal Chuseok, the biggest holiday of the year in late September.

The current lockdown has been in place for six weeks in the capital region and for four weeks across the country, but infection numbers remain relatively high.

The fresh extension could kill the hopes of hundreds of thousands of small businesses for business to pick up as the holiday approaches.

But the gathering ban will be eased very slightly for vaccinated people starting from next week. Currently, private gatherings are limited to two people in the capital region after 6 p.m., but up to four people can mingle if two of them are vaccinated.

Fears are growing that lockdown-fatigued Koreans will simply decide to ignore the rules. According to analysis of smartphone data, traffic decreased only 0.1 percent across the country in the second week of August and rose 4.1 percent in the capital region.

Some countries that have been relatively successful in their vaccine rollout are trying to find ways of living with coronavirus rather than hunkering down until the bitter end. But in Korea the vaccination rate still stands at only 21.1 percent.

The government now believes that lockdown can be eased only if the numbers of critically ill patients and deaths go down even if infections remain high, but severe cases are approaching 400 amid the latest surge and 53 patients died in the third week of August, up 29 from a week earlier.

Lockdown Extended for Another 2 Weeks 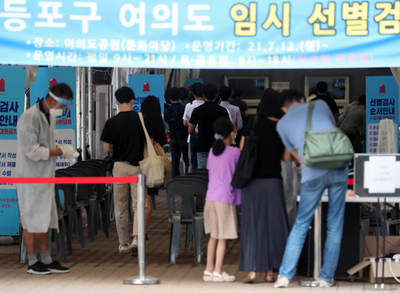 Lockdown to Be Tightened Across Korea Tuesday

No End to Coronavirus Surge Despite Lockdown

Seoul Lockdown Extended for Another Week

Korea Likely to Stay in Lockdown for Weeks

Amid the resurgence of coronavirus infections, domestic airlines saw passenger traffic decline more than 18 percent last weekend compared to a week earlier.Airlines face another huge hit after a slight recovery in passenger numbers on their domestic routes, amid curtailed international flights.Accor...

The ruling party is mulling additional relief payouts to people hit by the coronavirus epidemic, but there are increasing concerns where the money will come from and who will qualify.The government says it is too early to discuss another payout. "We need to focus our attention on quarantine measures...

The Korean Paralympic team arrived in Tokyo on Wednesday.The Paralympics start on Aug. 24 and end Sept. 5 with over 4,400 athletes from 130 countries competing in 539 events in 22 disciplines. Taekwondo and badminton were newly added.Korea's delegation consists of 159 people, of which 86 are athlete...

Loona Celebrate 3 Years on the Stage

Girl band Loona marked the third anniversary of their debut on Thursday. Loona have attracted many fans not only from Korea but also all over the world since debuting in 2018. They have topped iTunes' album chart in the U.S. with all four albums they have released. Their latest mini album "&" ca...

The labor costs of Korea's major game developers have soared by over W90 billion in the first half of this year because they paid out bumper incentives to keep top staff from being poached (US$1=W1,170). According to business reports Wednesday by the six major game developers, top-ranked Nexon spent...
Hong Kong Refuses to Recognize Korean Vaccination Certificates
Hostage: Missing Celebrity (2021)