Prime Minister Chung Sye-kyun met with representatives from the Korean Medical Association on Monday to avert another doctors’ strike but failed to persuade them.

Emerging from the meeting after some 70 minutes, the KMA representatives said there was “no change” in their plan to go on general strike later this week.

After an urgent meeting with representatives from the Korean Intern Resident Association the previous day, Chung said doctors “agreed to participate in continuing to treat coronavirus patients,” but they went no further than that.

Doctors are up in arms over the government’s plan to increase medical school quotas over the next decade to deal with a perceived shortage of specialists, but physicians say the real problem is the concentration of practitioners in a few lucrative fields like plastic surgery and dermatology.

The Office of the Prime Minister still held out hope that another strike could be averted, saying, “The government and the KMA agreed to immediately start working-level talks to put medical services back on track as soon as possible.”

The KMA also said that it will continue to talk with the Ministry of Health and Welfare to resolve the problem but demands that the government scrap its plan and start talks from square one.

But the ministry says it has sufficiently discussed the matter with healthcare policy and other medical experts to come up with the plan and has no mind to start all over. 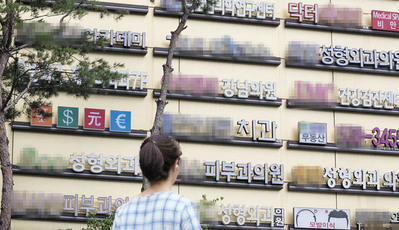 Doctors Go on Strike Against Swelling Their Numbers

Too Many Hospital Beds But Too Few Doctors

Waits of Up to 24 Hours in Big Emergency Rooms

Most Top Hospitals Are in Seoul

Biden to Be Regularly Tested for Coronavirus, Campaign Says

Democratic presidential nominee Joe Biden and his running mate, Kamala Harris, will be tested regularly for COVID-19, an aide said on Monday, as the campaign prepares for the possibility of more public events in the run-up to November's election.Since the coronavirus began spreading widely in the Un...

Poorer households had to spend a bigger proportion of their income on housing than middle or high-income households in the second quarter of this year. According to Statistics Korea on Monday, the average monthly housing expenditure of households in the lowest income bracket increased 13.8 percent o...

U.S. Secretary of State Mike Pompeo said Monday the United States will ensure Israel's military advantage in the Middle East under any potential U.S. arms deals with the United Arab Emirates."The United States has a legal requirement with respect to qualitative military edge. We will continue to hon...

The government of Hong Kong is refusing to recognize vaccination certificates from Korea, so Koreans will be denied visa-free entry to the territory and have to endure three weeks' quarantine there.Hong Kong tightened entry and quarantine requirements after a fully vaccinated woman from the U.S. tes...

The government is easing the real-state tax burden on people who own just one home as property values go through the roof.The ruling Minjoo Party and opposition parties on Thursday agreed to raise the threshold where homeowners start paying property surtax from homes worth W900 million to W1.1 billi...
Poorer Households Face Higher Housing Costs Than the Rich
High School Seniors Worry About University Entrance Exam