A slowdown in private spending due to the protracted coronavirus epidemic has made it hard for part-timers to find jobs.

The drastic minimum-wage hike already prompted many store owners to cut down part-timers’ hours, and now lockdown has led to more shopkeepers doing without staff altogether.

The latest data from Statistics Korea show a sharp decline in small businesses that employ at least one person by 54 percent or an average of 176,000 per month from January to July compared to the same month in 2019.

At the same time the number of small businesses without staff other than the owner and family increased by 102,000 a month so far this year.

Many small businesses have closed down altogether. The number of self-employed workers dwindled by 138,000 on-year during the first half of this year to 5.47 million, the biggest decline since the first half of 2009 in the aftermath of the global financial crisis. That means university students, for example, have trouble earning extra income during the summer holidays. Job search portal Alba polled 2,500 university students, and 83.3 percent said it was difficult to find a summer job.

Many take anything that is available. One person in Busan who is studying for the civil service exam said, “Even for heavy menial work, hundreds of jobseekers compete for every job.”

Restaurant jobs pay very little, yet many are grateful to land one of them because they are increasingly scarce. But the government has so far focused on creating more part-time jobs for the elderly but neglected record youth unemployment.

Half of Self-Employed Work 2 Jobs to Make Ends Meet 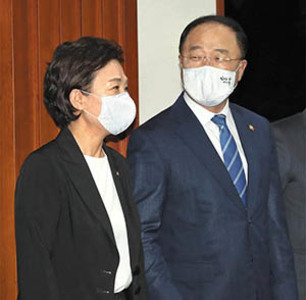 Half of Korea's Workers Lose Income to Coronavirus

To block saliva droplets as well as ultraviolet rays in crowded outdoor spaces, wear a mask, hat and sunglasses.

Lee Hyo-ri has created a massive storm in a teacup with remarks that seemed insufficiently reverential of Mao Zedong, the founding father of communist China. On an MBC variety show last Saturday, Lee appeared as a member of a project girl band. As she and host Yoo Jae-suk were talking about her stag...

The British weekly the Economist has slammed the Korean government for using increasingly authoritarian tactics under a thin veneer of its liberal credentials. In an article Saturday titled "[Korea's] liberal rulers unleash their inner authoritarians," the Economist wrote that officials in the Moon ...

Officials with the World Health Organization are downplaying a confirmed case of a Hong Kong man who became reinfected with COVID-19, saying chances of that happening on regular basis are slim.University of Hong Kong scientists announced the development Monday, saying the virus strains that infected...
Abbot accused of sexually abusing schoolboy
Jamaican Olympic Champion Usain Bolt Self-Quarantines After Testing Positive for COVID-19