Realtors are enjoying a once-in-a-lifetime bonanza as the apartment price bubble inflates to record levels.

One gauge of their success is that fewer estate agents than at any time in 19 years closed their doors in the first half of this year after housing transactions hit a record high of 1.28 million in 2020.

According to the Korea Association of Realtors on Thursday, 9,302 real estate agencies opened their doors in the first six months, 5,822 shut down, and 421 suspended business.

And still more people are taking the annual license exam. No fewer than 408,492 people signed up for this year’s exam before applications closed on Aug. 13, up a staggering 65,000 on-year and an all-time high. 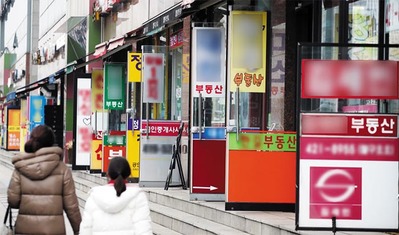 The Korea Composite Stock Price Index plummeted on Thursday on overnight declines on Wall Street and other global bourses. The KOSPI fell 1.9 percent to 3,097.83, the lowest since April 1. U.S. stocks slid overnight as the Federal Reserve hinted at an earlier end to monetary easing.The tech-heavy Ko...

The remains of independence fighter Hong Beom-do have been laid to rest in his homeland 78 years after his death. A burial ceremony was held Wednesday at the National Cemetery in Daejeon attended by President Moon Jae-in and first lady Kim Jung-sook as well as other dignitaries. In a eulogy, Moon th...

The government's contract with Moderna was so sloppy that it failed to specify delivery dates for coronavirus vaccines, it was revealed Tuesday, contradicting its claims that the drug maker did not deliver on time.The government has been suspiciously cagey about the terms and cited alleged confident...

No Breakthrough in Gov’t Talks with Doctors

Prime Minister Chung Sye-kyun met with representatives from the Korean Medical Association on Monday to avert another doctors' strike but failed to persuade them. Emerging from the meeting after some 70 minutes, the KMA representatives said there was "no change" in their plan to go on general strike...
KOSPI Plummets on Global Uncertainties
Hong Kong Refuses to Recognize Korean Vaccination Certificates